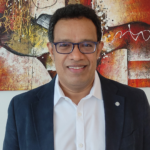 Byju Pillai brings more than 30 years of rich experience from the IT industry, handling Sales, Marketing, Finance, Distribution, Channel & Business Management. He combines an understanding of current as well as emerging technologies and has been developing several successful business models around it. Byju pioneered the unique “Technology Enabler” distribution model which redefined the way complex technology solutions were traditionally.

Byju was also involved in Powertel Boca Limited as GM – Sales & Marketing, a start-up which established itself as the number one modem company in the country before being  acquired by Citrix Systems. Byju started his career in HCL Kolkata, and then moved to Godrej to run their printer business through channels. Byju is an Electronics and Communication engineer. He was a member of Storage Networking Industry Association (SNIA) India Chapter. Currently he is a member of TiE, Bangalore. He is the current spokesperson for Technology Distribution Association of India (TDAI).

Aditya Madhok brings 15 years of experience in corporate financial management and consulting to the company. More recently, he was CFO of Westcon (one of the world’s largest Enterprise IT Distributors) for the Asia region and led the consolidationand growth of the distributor across 11 countries in Asia. Prior to that, he served as Group Financial Director of Etisalat (Middle East’s largest Telecom operator) in the UAE with responsibility for their financial operations across Middle East and Africa.

Aditya spent several years at Deloitte UK providing assurance and advisory services to the TMT (Technology, Media and Telecommunications) sector. In his role he supported clients across several geographies in audit, accounting, M&A transactions and financial re-organizations. Aditya has an MSc Finance from the London School of Economics and is also a UK qualified Chartered Accountant (ICAEW).

Mr. Vijay Kumar Ajmera, by profession he is a Chartered Accountant and presently designated as General Manager (Finance) at Savex Technologies Private Limited. He is having vast working experience of +25 Years and presently associated with Savex for more than 16 years. At Savex he is handling multiple portfolios which include Legal Compliance, Tax compliance, Finance, account sand supporting various teams within Savex in day to day operations.

Raunak is an MBA from Harvard Business School, graduating in 2015. He leads new initiatives and plays a key role in business development and transformation. In his free time, you will find him underwater, an avid Scuba Diver with over 100 dives under his belt.

An Electronics Engg graduate from NIT Jaipur, Atul is a highly accomplished Techno Commercial Business Leader with 30 years of experience in IT, Mobility, e commerce and Cloud based services industry. He is a team player, easily approachable , and is well respected in the industry.His quest for “WHO AM I” , drives him in his spiritual learning, and he loves meditating . His other key interests lie in watching sports and